When a larva has the opportunity to eat away the leaf tissue in all directions, the result is a more or less circular bladder, a blotch mine. However, a blotch may also result when the loops of a corridor mine are so strongly convoluted that the walls separating them are eaten away too. These two types of blotches are distinguished as primaire and secondary blotches, respectively. In most cases the frass pattern clearly indicates which of the two types is at hand. 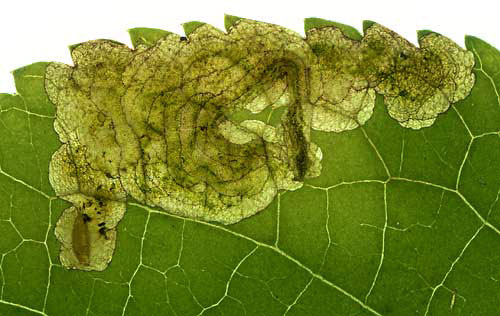 Just like in corridor mines can the larvae be limited in their expansion by the leaf veins. An easily observed character distinguishing two common blotch making sawflies on Alder, Fenusa dohrnii and Heterarthrus vagans, is that the blotches of the first species tend to be squeezed between to side veins (except close to the leaf border, where the veins are thin), while those of vagans are little determined by the nervature. 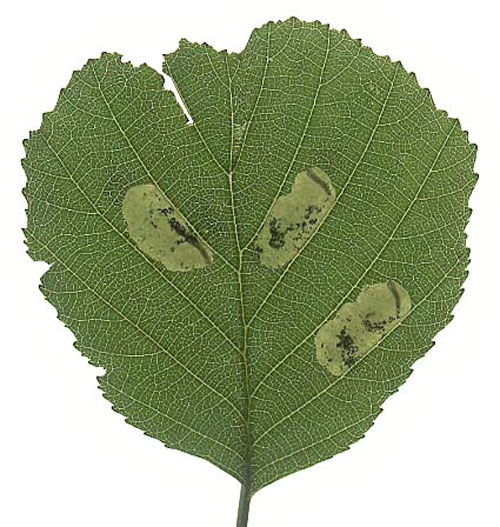 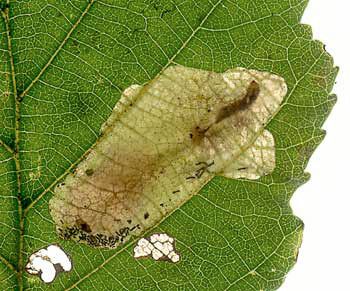 These mines begin as a normal, narrow corridor, but then abruptly widen into a primairy blotch. This type of mines of characteristic for instance for the fly genus Amauromyza (e.g. A. labiatarum), but also occurs in quite unrelated groups like Stigmella plagicolella. Frequently the initial corridor becomes overrun by the later blotch, and often the corridor is recognisable only in the frass pattern. The switch in behaviour that is responsible for the change in mine coincides with a moult. It is remarkable that the transition from corridor to blotch often goes together with a 180° switch in the direction of the larva.

In Stigmella plagicolella it takes about 11 days to make the corridor; the subsequent blotch was made in 4-11 days, depending on the temperature (van Frankenhuyzen & Freriks, 1972d). 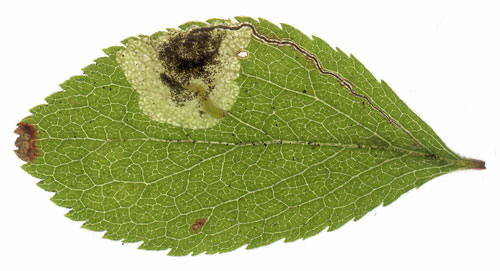