More or less round mines, with a diameter of mostly not more than a centimeter, having in their centre, in upper or lower epidermis, a small hole. Most mines of this type are made by the Lepidoptera family Coleophoridae. The larvae of this group live in a case, in which they can move over the plant. Before feeding the case is attached to a leaf with silk; then a hole is chewed in the epidermis, and subsequently the larva eats away as much leaf tissue as it can reach without having to leave its case. Because they eat away all leaf tissue, the flecks are quite transparant. Frass is expelled through the rear end of the case: fleck mines do not contain frass. 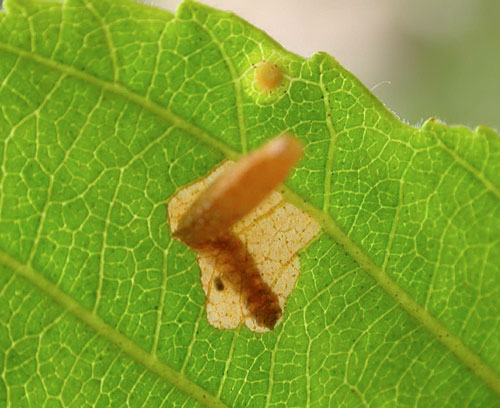 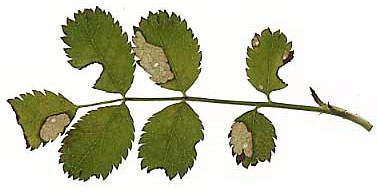 In a few cases fleck mines are made by larvae that do not live in a case. The larvae of Bucculatrix noltei initially make a very fine corridor, but soon start to live free. They bite holes in the lower epidermis, eat from there a good quantity of leaf tissue, leave the mine, and start again elsewhere. That their mines contain (almost) no frass is because the larvae spend so much time outside of the mine. 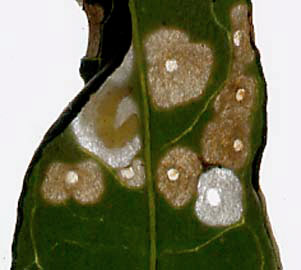 Tentiform mines essentially are blotch mines, with the peculiarity that the larva (always of the Lepidoptera family Gracillariidae) covers the inside of the mine with silk. The drying silk contracts, causing the epidermis to pucker and taking a plister-like shape. Young tentiform mines are difficult to distinguish from normal blotch mines; they are never full depth.

The very first part of a tentifom mine is often overlooked. It consists of a flat, iridescent egg shell, folowed by a corridor (short in most cases, up to 2 cm in some species) in the epidermis. In many cases this initial corridor is overrun by the later developments.

When the mine assumes a blisterlike shape, the larve is, for the greatest part of the mine, further removed from the outside. By this mechanism the larva may obtain some protection from the ovipositor of hymenopterous parasitoids (Brandl & Vidal, 1987). In their latest instars the larvae have unusually long setae (“hairs”). This may lift the larve from the floor of the mine, making the palissade parenchym above more accessible (Miller (1973a) but this too may be a mechanism to position the larva as fas as possible out of reach of an ovipositor. 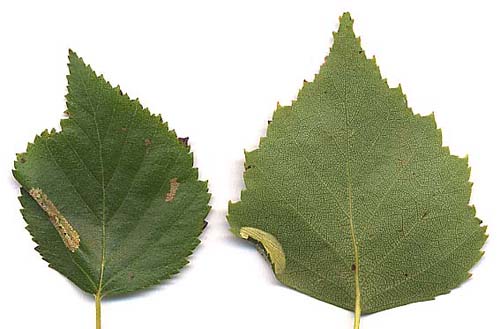