A bit of history

Many mines are all but inconspicuous, and it is almost certain that also in former time sometimes they must have attracted attention. Nevertheless, the first written reference to mines of which I am aware is of a relatively recent date.

Johann Christoph Beckmann publishes a booklet of just 18 pagina’s about “snake shapes” that hade been seen on the leaves of trees. I know of the existence of the brochure only because it is mentioned in a book by von Rohr (1732) and in a paper by Quantz (1927). Actually, neither of the two has seen Beckmann’s rare booklet, but have read an analysis of it in the “Acta Leopoldina” of 1692. From these two sources it can be derived that the mines of of Lyonetia clerkella on Prunus are concerned. Beckmann observed that the “shapes” were caused by insect larvae, that in turn had originated as the the effect of a stinking mist and un unusually warm preceding winter. Mines are created in two ways: either a “small worm” crawls over the leaf, and feeds on it while proceeding, or insects produce a corrosive liquid that damages the leaf. 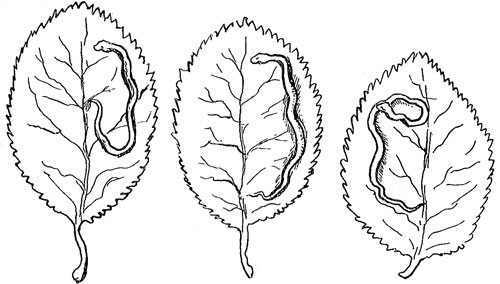 Agromya alnivora op Alnus incana; from von Lebewaldt (1692, Quantz, 1927a). By adding shadow lines the illustator has made three-dimensional snakes out of flat mines.

Also a paper by Adam von Lebenwaldt in the Acta Leopoldina of 1692 is known to me only through Quantz, who also reproduced the drawing above. Reporting from Lower Styria he states“ After heavy rain almost all alders leaves in the forest showed these snake-like markings. A so-called sorcerer was captured then, who had caused this rain with assistance of the devil, and confessed to have had the intention thereby to spread a poisonous pestilence over the village; which however was prevented by god.” Upon which the sorcerer was convicted to death on the stake.

Also the paper by Magister Georg Heinrich Büchner, vicar at Seebach bei Müllhausen in Thüringen appeared in the Acta Leopoldina, but is has also literally been copied in Qantz. In this publication it is definitely established that the mine of Lyonetia clerkella is caused by a tunnelling insect larva, that originates from an egg.

In the third part of his impressive, six-volume work on the biology of insects de Réaumur described the work, larvae and pupae of quite a number of miners, and their habits. He realizes that individual species of miners are restricted to specific plants. And, obviously because the biology of the larvae reminded him of the life of coal miners, he coined for these group of insects the name “mineurs” – which meanes miners.

In the 19th century there was not much interest in leaf miners, perhaps one was too much occupied with the need of describing and classifying the overwhelming multitude of insect species just then discovered. An exception was the book by Kaltenbach, focussed on the relation between insect and plant species. Miners play an important role in this voluminous book.

Without any doubt it was Erich Martin Hering, who, during his long and astonishingly active life shaped the study of leaf mines as a disciplin of entomology in its own right (and even gave it a name: “hyponomology”). Next to a long series of papers, running from 1920 to 1967, he published a book on the biology of leaf miners in 1951. His most important work, cited countless times in this website, is his three-volume work on the leafminers of Europe (1957a), actually a continuation and elaboration of an earlier book which had appeared in 1934-1937.