In the adult insects the antenna has eight flagellomeres at most. The larvae, “maggots”, have no recognisable head.

As a matter of fact, the larvae are not headless: the head is strongly reduced and withdrawn into the thorax. The main remnant of the head that is visible are the small jaws, the mandibles (sometimes called mouth hooks). The mandibles are supported and steered by a system of chitinised rods inside the head, the cephalic skeleton. Contrary to most other mining insect groups, Diptera larvae are never flattened to accomodate the little space offered by the mine.

There are always two pairs of respiratory openings, spiracula: one pair far to the front (on top the first thoracic segement), the second at the extreme rear end. In the simplest case a spiraculum consists of a high papilla with (in full-grown larvae) three small oval openings that allow air to enter the tracheal tubes inside the . Ech opening is on top of a small papilla. In some species the spiracula are enlarged and modified, and the number of papillae can rise to up to 40 and more.

Often each segment carries a transverse band of fine spines that are directed backwards. These enable the larvae to brace themselves when feeding and to move around in the mine.

Diptera larvae pass through three instars before they pupate. The first two instars can differ appreciably from the latest one, sometimes giving rise to identification problems. Below pictures are shown of the ‘head’ and mandible of the same species in the first and third instar. 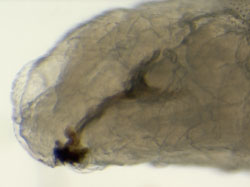 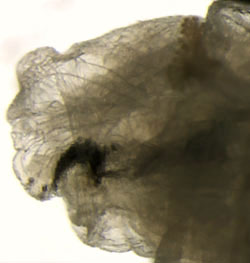 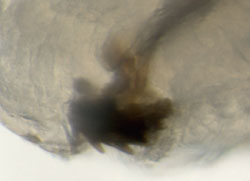 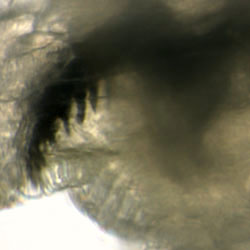 Often the instar can be determined by counting the number of papillae on the rear spiraculum. The basic number is 1, 2, and 3 for instars 1, 2 and 3, respectively (as long as this number has not secondarily be enlarged). 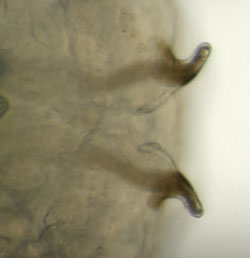 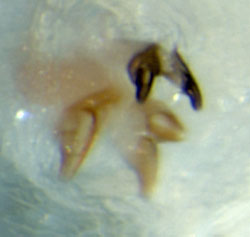 2nd instar (the larva is about to moult; the 3rd instar spiraculum is already visible through the old skin.) 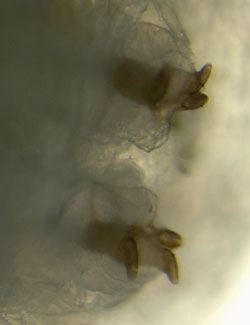 The mandibles basically are just a pair of small sickle-shaped hooks that can only be moved vertically. Diptera larvae therefore mostly feed lying on their sides. 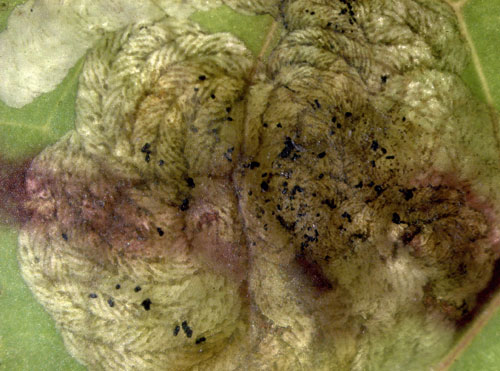 In the Brachycera the pupa is formed inside the hardened skin of the final larval instar. For this reason the pupa, with its cover, is called the puparium. It more or less resembles a squat sausage, with only the spiracula protruding. 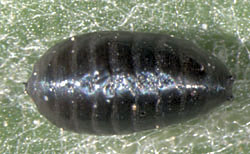