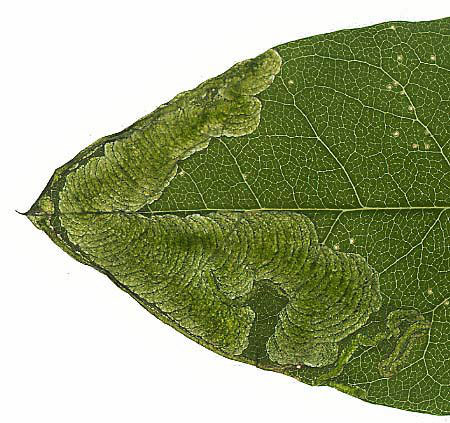 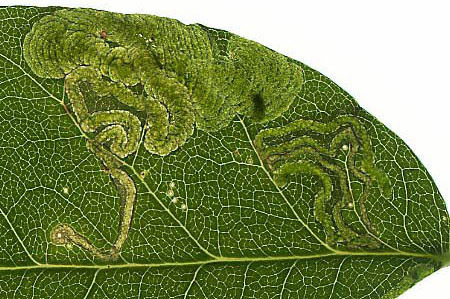 in the leaf base

Hooklike, upper-surface secondary blotch. The mine starts as a rather narrow corridor in the centre of the leaf. From there the corridor runs in the direction of the leaf margin, not much widening, and quite tortuous. Once the leaf margin is reached the mine suddenly starts to widen strongly; often then also the direction of the mine switches. Frass deliquescent, in a wide, bright green central band. Primary and secondary feeding lines very prominent. Older mines wither and turn brown, later white. Pupation outside the mine.

With reservation also mentioned by Hering (1957a) from Lupinus.

Larvae mainly from mid June till mid July, in a single generation (Askew, 1968a). However, Klavs Nielsen found Denemarken on 5.x.2016 occupied, seemingly completely developed mines; this could indicate a second generation.

BE recorded (Mortelmans & Dekeukeleire, 2012a).

From Scandinavia to the Iberian Peninsula, and from the UK to Poland (Fauna Europaea, 2007).