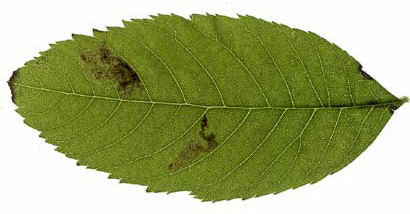 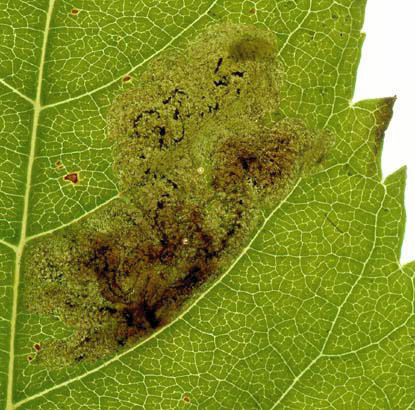 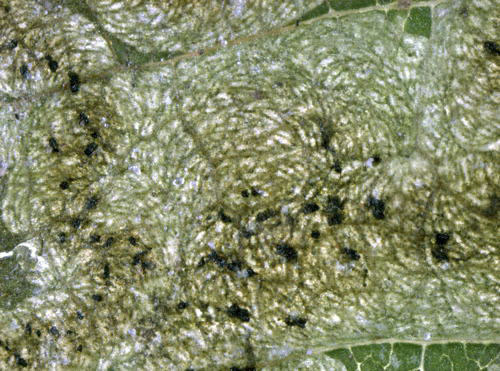 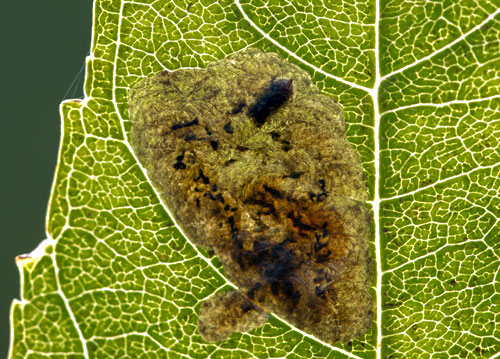 Greenish, later blackish, tortuous or irregularly star-shaped, upper-surface corridor, rather strongly widening in the end, and usually forming a secondary blotch. Frass in the first part of the mine in two ill-defined rows. Primary and secondary feeding lines present, but short and criss-cross. Pupation within the mine; the front spiracula penetrate the upper epidermis.

Larvae in September-November (Hering, 1957a), in the UK only in October (Griffiths, 1959a). In the Netherlands larvae from September 20 till November 6th, puparia from October 4th.

BE Found in 2009 for the first time by Jean-Yves Baugnée (Brabant wallon, Court-Saint-Etienne).

NE Found for the first time in the Netherlands (near Schiedam) by Ben van As in the nineties of last century.

From Scandinavia to the UK, Germany, Roumania and Thrace (Fauna Europaea, 2007).

Hering (1957a) wrote that pupation occurs outside the mine. Dr von Tschirnhaus (in litt.) confirms that in Germany this is the firm rule. This is repeated by the British authors Spencer (1972a) and (Robbins (1990a). However, in the abundant material from the Netherlands the greyish-brown, shining puparia invariably are inside the mine, while the slender front spiracula penetrate the epidermis in Chromatomyia way. Pupatiom within the mine is described by another British author, Allen (1958a) and by Skuhravá & Roques (2000a) (neither of the two mentions the penetrating front spiracula); see also a picture above. It seems possible that the Dutch “heringii” in fact is an undescribed species, that fairly recently has established itself here. This supposition is strengthened by that fact that de Meijere did not know heringii from the Netherlands, and had to base his larva description (1938a) on material from Germany.

It seems that since its first discovery in the Netherlands the species is expanding strongly. Not only the number of localities is quickly rising, also the number of mines per tree increases. If the mine wouldn’t occur at a time that the leaves are about to drop anyway, heringii would be considered a pest species.

Another puzzle to be solved is how the species hibernates and aestivates. Spencer (1976a) writes that puparia, collected in early November, produced flies in two weeks; because ovipostion is impossible by that time, this must imply hibernation as adult fly. However, Skuhravá & Roques (2000a) write that adult flies appear only in spring. Adults in spring (or even the autumn before) and larvae in late autumn must imply then either adult aestivation and oviposition in the autumn, or oviposition in spring and aestivation of the eggs.