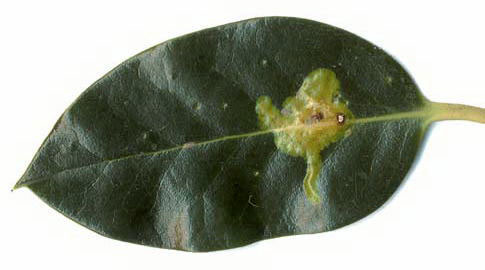 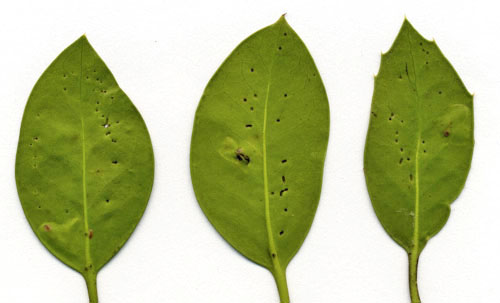 Nieuwendam, 30.iii.2009. Three mines, already in the puparium phase, with a lower-surface part; the middle one hit by bird predation. 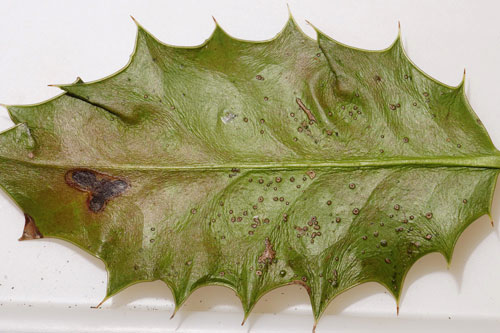 Oviposition, in May-June, in the underside of the petiole or midrib of a young leaf, leaves a clear scar. In the course of the following months the larva tunnels in the midrib in the direction of the leaf tip. Only in December-January it enters the leaf blade, where the fist moult takes place. The larve then makes an interparenchymatous blotch in the blade, in the middle layer of the (three cell layers thick) palissade parenchyma. Most frass is deposited in the centre of the blotch; here the epidermis often turns wine red. Often the larva, not long before pupation, descends into the upper layers of the sponge parenchyma, and makes a large blotch there. This second mine, despite its size, is quite inconspicuous because there is no discolouration whatever. Pupation is within the mine, upper-surface, but lower-surface when a second blotch has been made. The front spiracula penetrate the epidermis.

Larvae in the blotch mine from December till about May.

From Scandinavia to France and Italy, and from Ireland to Poland (Fauna Europaea, 2007); Hungary (Csóka, 2003a).

Very common, but in parks and gardens (where the Holly leaves tend to be thicker) much more frequent than in nature.

Ph. ilicis is member of a monophyletic group of species that all mine on trees of the genus Ilex. Whereas only one species of this group occurs in Europe, no less than eleven species occur in North America (Lonsdale & Scheffer, 2011a).

More than any other leaf miner Ph. ilicis falls victim to bird predation. See for the biology of this fascinating miner Miall & Taylor (1907a) and Ellis (2000a).

The picture below shows normal mines (both have fallen victim to bird predation) and a corridor. The latter is made by an ilicis larva that, upon leaving the midrib, didn’t manage to produce a blotch in time. His corridor has swiftly been choked by callus tissue, and in the end the larva has been squeezed to death by the callus.

Warrington present pictures of a small series of mines that resemble those of Ph. jucunda, but attributed by him him to ilicis because of similarity in rearead adults. No details are given, and the identification is inacceptable. It can not be excluded that a third species is involved. 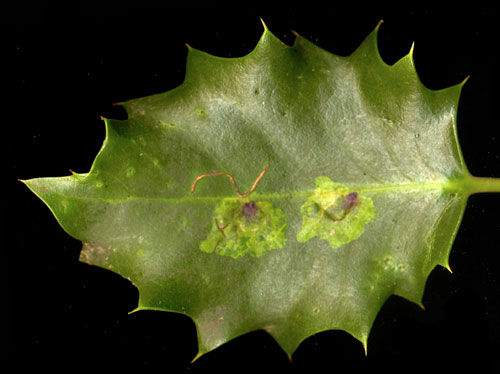 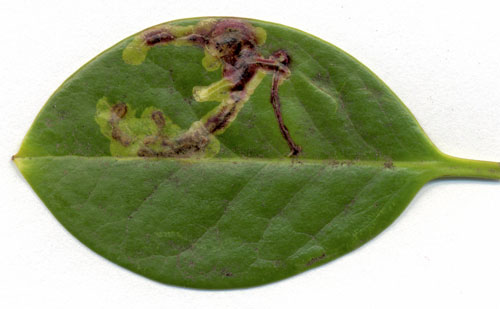 Ilex aquifolium, Nieuwendam, 30.iii.2009; very rarely the larva manages to make a blotch from the deadly gallery, like in the mine to the top right.