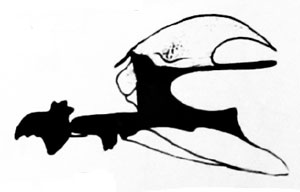 Long corridor in the petiole, descending to the very base, then again running upwards. The petiole turns black and the leaf is strongly malformed and underdeveloped. The corridor lies rather deep over its entire length; unlike in the m ine of Heptameles ochroleucus there are no spots where it is only covered by the epidermis. Pupation is after the mine has been vacated through a hole in the concave outside of the petiole.

according to Robbins (1991a) rarely also Dryopteris.

From Scandinavia to the Pyrenees, and from the UK to Poland; also parts of European Russia (Fauna Europaea, 2007).

The larva, about 7 mm in length, pale yellow to straw coloured, is described in detail by de Meijere and Dušek.

The detailed description by de Meijere has been cited repeatedly in the later literature. Shortly however it was discovered by Ackland (2002a) that de Meijere’s identification of the miner was erroneous, and did not refer to Chortophila (= Phorbia or Acrostilpna) latipennis Zetterstedt, 1838, but to Chirosia griseifrons.