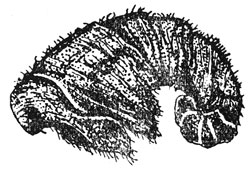 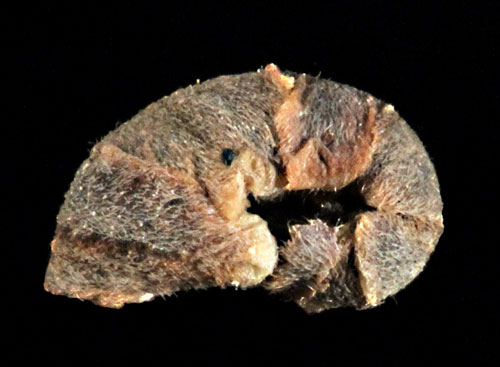 Strongly arched composite leaf case of 7-8 mm. The case consists of a number of mined leaflets placed transversely one after the other. Each leaflet is positioned a bit obliquely in relation to its predecessor, resulting in a somewhat helicoidal case. Mouth opening therefore not terminal, but more or less to the side. Larvae at the underside of the leaves. Often several together, making their mines quite conspicuous.

Originally the species was erroneously associated with “Aster acris”, which explains the species’ name. Aster acris is a synonym of A. sedifolus, now Galatella sedifolia, a plant that is widely distributed in southeastern France (Erwin Rennwald in litt.)

Associated by Chrétien (1926a), somewhat offhand, with “Lotus hispidus” (= L. parviflorus or subbiflorus).

Larvae active in winter and spring (Suire, Zerafa), full fed larvae leave the host plant. Part of the larvae develop into adults already before the summer; another group emerges as adults in autumn and a third cohort finally hibernates and produces adults after the winter (Hering, 1967a).

From Czechia to the Iberian Peninsula, Italy, and Greece, and from France to Hungary (PESI, 2018).