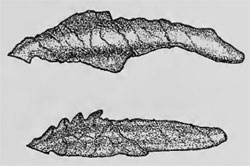 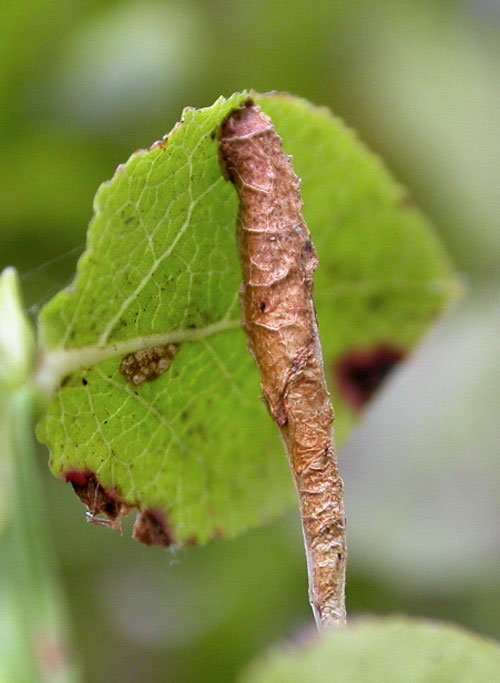 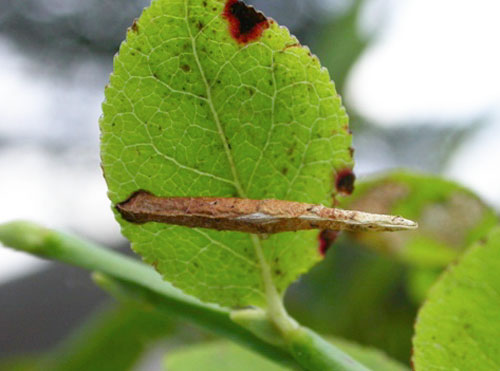 The larva makes a blotch mine, then cuts the mined part out of the leaf and uses it to make its first case. The excision is oval, not round, as when made by an Incurvaria. At a later stage another, rarely more, mines are excised to enlarge the case. The final case is a composite leaf case, 8-14 mm long, brown or blackish. The mouth angle is 40-55°, the rim of the mouth is somewhat flared (Toll, 1962a).

On Vaccinium vitis-idaea confusion is possible with Coleophora idaeella. A difference then is that vacciniella mines on top of the leaf, while idaeella sits under the leaf (Itämies & Tabell, 1991a; Tabell in litt., 2009).

Before the excision is made, the blotch may be confused with the work of an Incurvaria. However, Incurvaria’s oviposit within the leaf tissue, using an ovipositor, while Coleophora’s deposit the egg exteriorly. The egg of vacciniella is black, and looks like a miniature turban-shaped cake; it is placed at the leaf underside (Dziurzynski, 1958a).

Recently recorded from Andromeda in Lepiforum.de. The description of the synonymous Coleophora betulaenanae by Klimesch (1958b) was based on a considerable number of larvae collected and bred on Betula nana, in several localities with Vaccinium species in the undergrowth. It is difficult to dispose this off as xenophagy.

Larvae from July; they are full grown in autumn, hibernate in their case, and pupate shortly after winter (Hering, 1957a).

From Fennoscandia and northern Russia to the Pyrenees and Italy, and from France to Romania (Fauna Europaea, 2009).