The Gracillariidae form one of Europe’s largest families of Microlepidoptera (“micromoths”). Europe counts about 200 species of them (Kuznetsov, 1990a; Parenti, 2000a). The larvae of all species live as miners, at least during their first instars. The females don’t have an ovipositor; the eggs are cemented to the leaf. The larva has 3+1 pairs of prolegs.

Most characteristic for this family is that there is not just one, but two metamorphoses (“hypermetamorphosis”). The larvae that hatch from the egg don’t have feet and are strongly flattened. In this stage they mine in the epidermis, or the layers of cells just below. The mouthparts are built for the drinking of cell sap: the mandibles are broad and sharp, working as a pair of hedge-clippers in cutting through the cell walls. The upperlip is strongly widened, to prevent the sap from leaking away. In this stage the head is strikingly triangular.

After some moults in this stage a real, first, metamorphosis takes place. The larve gets feet, the is no longer flattened but takes a cylindrical shape, and also the mouthparts have been changed totally: no longer built for cutting and drinking, but for the chewing of plant tissue. The head has got silk glands, necessarily for the eventual construction of a cocoon. After some more moults finally the second, normal metamorphosis occurs ((Body, Burlat & 2015a; Davis, 1987a; Emmet, Watkinson & Wilson, 1985a; Pottinger & LeRoux, 1971a; Principi, 1953a). 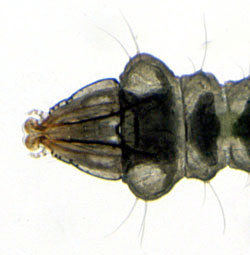 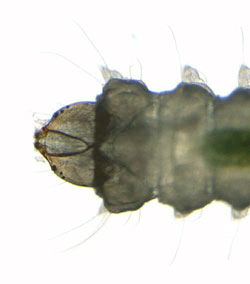 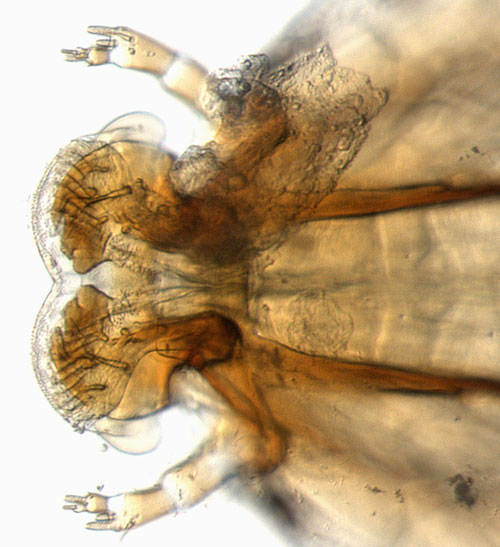 Even without looking into details of the mouthparts it is easy to discriminate the two stages of the larva. Young larvae often have a large black spot on the pronotum, and a series of somewhat smaller spots on all subsequent segments. Second stage larve are practically unpigmented, save perhaps a weak spot on the pronotum. 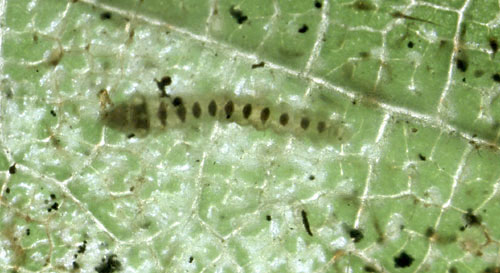 Three subfamilies are recognised. The Gracillariinae have two sap-drinking instars, followed by an instar that feeds as leafminer on parenchyma, and finally a free-living stage. Lithocolletinae have three or four sap-drinking instars, followed by two instars of mining parenchyma feeders; they pupate in the mine. Phyllocnistinae spend all stages of their larval life as cell sap drinkers in the epidermis; for that reason they are sometimes considered a family of their own.

Gracillariinae species make fairly small tentiform mines. The epidermis of the mine is only weakly wrinkled or folded, and, also in young mines, coloured brownish. The free-living larva lives under a folded or rolled lobe of leaf margin, fixed with silk, not necessarily of the same leaf in which it made its mine. There are several genera; the largest ones are Caloptilia and Parornix.

The only three genera of Lithocolletinae are Phyllonorycter and the new arrivals Macrosaccus and Cameraria. The mines of Phyllonorycter are upper- or (mostly) lower-surface, large in comparison to those of the Gracillariinae, and often have distinct folds or wrinkles. Except in old, withered, mines the epidermis is not brown but yellow-green or silvery. When the mine has reached its final surface the larva covers the inside with silk that contracts upon drying. It is this shrinking of the inside lining that causes the under epidermis (in a lower-surface mine) to develop fold, and the ‘roof’ of the mine to bulge. Frass is mostly deposited in an angle of the mine. Pupation is inside the mine, in a more or less well-developed cocoon. Often frass is incrusted in the cocoon wall. Often the pupa and the cocoon provide the most reliable characters for identification (Emmet, Watkinson & Wilson, 1985a; Gregor & Patocka, 2001a).

A remarkable aspect of Cameraria larvae is that the mandibles, that were prominently present in the sap-drinking stage, in the second stage are strongly reduced and apparently no longer functional (Sefrová & Skuhravy, 2000a).

The Phyllocnistinae count but one genus, Phyllocnistis. The larvae spend their whole life as sap-drinkers in the epidermis, making extremely long corridor mines. These corridors are rather wide and strongly resembly the shining trail of dried mucus left behind by a snail. An unusual aspect of these corridors is that they never cross themselves. The mines, particularly the ones of Phyllocnistis xenia therefore make one think of a printed circuit board. Also in this subfamily pupation takes place in the mine, close to the leaf margin. Over the pupa the epidermis somewhat contracts, causing the leaf margin to fold over (Emmet, 1985b; Seksyaeva, 1990b). An unusual aspect of Phyllocnistis species is that they preferably mine young leaves, at the end of young shoots; generally mines are rather to look for in the oldest leaves.

It is remarkable that among the invasive species of microlepidoptera a relative large number belong to the Gracillariidae (Sefrová, 2002a, 2003a).

Much information can be gathered from the website “Global taxonomic database of Gracillariidae (Lepidoptera)”, that is maintained by Jurate and Willy De Prins.