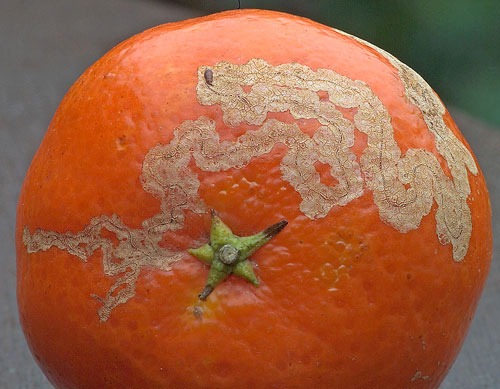 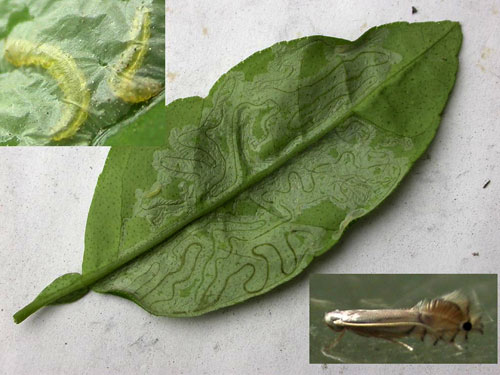 Long epidermal corridor with a well-marked central frass line. Mine mostly lower-surface, less often upper-surface, and rarely on the rind of the developing fruit. Pupation, like in all Phyllocnistis species, in a chamber at the end of the corridor, under an overturned part of the leaf margin. (A larva mining on on a fruit obviously stands no chance.)

In the tropical and subtropical areas where the species presently occurs there a large number of generations per year; there is no diapause.

BE Mines, but no living animals, have recently been found (Snyers, 2007a).

NE Not long ago an accidental introduction of this species was reported (Romeijn, 1997a), but is is not clear whether this involved moths, larvae, or just empty mines. In 2003 two Moroccan tangerines were found by Ben van As with mines in their peel. In 2008 my wife Albertine found a mined leaf in a batch of Spanish oranges with a completed pupal chamber, from which the remnants of the exuvium were protruding.

In Europe established in the Iberian Peninsula, Corsica, Italy, and Greece (Fauna Europaea, 2008); also Montenegro (Dimic, Spasic & Peric, 1997a). Elsewhere in Europe sometimes vacated mines are found on citrus fruits of leaves (Homan, 2005a). Recently a larva was found on a lemon tree in a garden centre in the UK, and successfully reared (Homan, 2012c).

A single mine may kill a leaf; there a very serious pest in citrus culture

The species seems to be native to Asia,but is found now in all regions where Citrus species are cultivated.