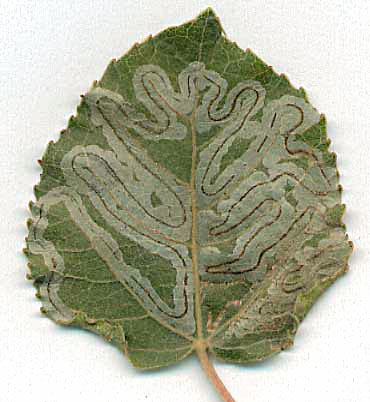 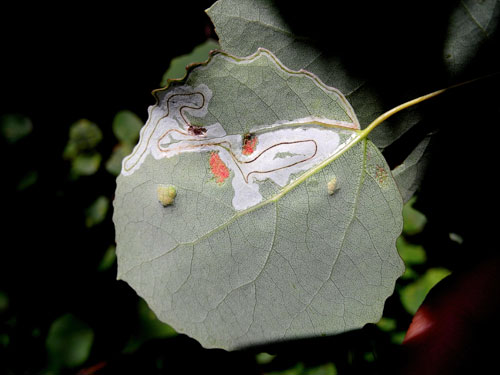 Very long, broad epidermal corridor that winds in dense loops over the upper side (often also the underside) of the leaf without ever intersecting itself. Frass in a continuous brownish black central line, much sharper and darker than in Ph. xenia. The corridor ends upon the leaf margin, where it widens somewhat while the leaf margin folds over. Here pupation takes place.

Sundy (1953a) described convincingly that the species also lives on P. alba. See also the note and pictures below.

Large parts of Europe, missing in the British Isles, Italy (but see Hartig, 1939a), the Mediterranean Islands and parts of the Balkan (Fauna Europaea, 2010).

The adult moth and pupa of Ph. xenia can hardly be distinguished from the one of Ph. labyrinthella. Many authors therefore consider the two conspecific, in which case Ph. labyrinthella is the oldest, therefore valid, name. Especially Pelham-Clinton (1976a) has argued for an autonomous status of xenia, in which he was followed by Emmet (1985b) (but not Emmet ao, 1985a!) and Kuchlein & de Vos (1999a). Indeed there seems to exist a constant difference in the frass line of xenia (broad, vague, greenish) and that of labyrinthella (narrow, sharp, brownish black). Several authors write that the mine of labyrinthella often extends to the underside of the leaf, something that does not seem to happen in xenia.

Ph. xenia was described from Populus canescens, a stabilised hybrid of P. alba and P. tremula. Both on P. alba and canescens the species is very common in the Netherlands. Scheffers & van As (2006a) and Ellis (unpubl.) have found mines on P. tremula in two different dune landscapes that, because of the host plant could be attributed to labyrinthella. However, the weak taxonomic distance between the hostplants mentioned (and also the commonness of alba/canescens in the dunes) make it impossible to arrive at an identification as labyrinthella on the host plant alone. See also Huisman ao (2009a).

The pictures below, taken in southern Norway, seem to show mines of Ph. labyrinthella. However, the host plant, bay willow, rather points to Ph. saligna. Because of the sharp frass line, but even more because the mines were strictly limited to a single leaf and did not descend along the petiole, with much hesitation I take them for labyrinthella. 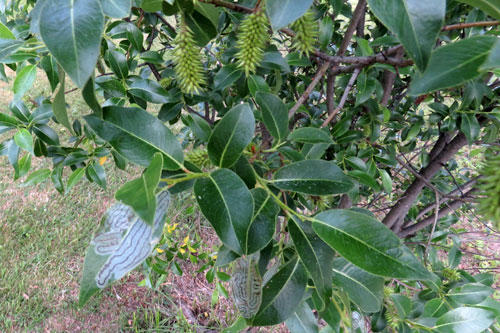 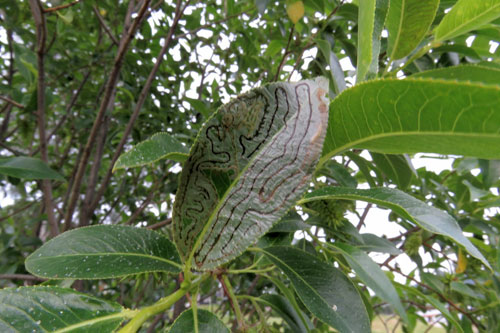 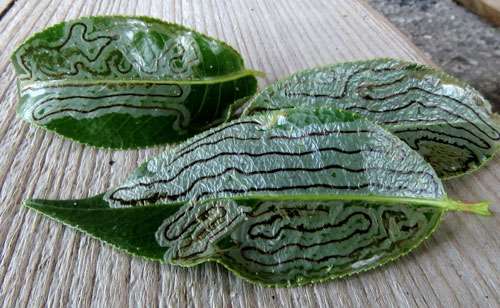