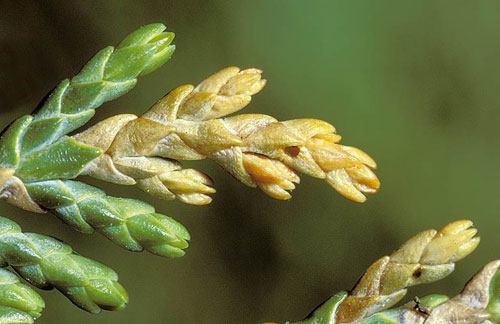 During autumn the larva mines a mere 9-12 leaves – the damage is quite inconspicuous. Hibernation occurs within the mine, and during mild days feeding may continue. After hibernation the larva lives as a borer, and empties 4-6 shoots, over a length of 0.5 – 2.5 mm, just below the tip of the shoot. The damaged shoots wilt and die off. In April – May the larva emerges for pupation.

The species is native in the western coastal region of the United States, and emerged in 1997 Britain, where it now is spreading rapidly (Agassiz & Tuck, 1999a; Heckford, 2004a). The hostplants are also on the European mainland very popular as ornamental conifers, and the discovery of this Argyresthia here will be a mere matter of time.

Pupa in a white fusiform cocoon that often is spun among the twigs, rather than on the ground, like in most Argyresthia‘s.