A good field character of mines of this family is that they start at a semiglobular, shining, black egg shell. The hatching larva bores itself into the leaf tissue immediately below the egg, at the same time depositing the contents of the embryonal gut into the emptied shell, giving it its black colour. Generally the mine is vacated before pupation. The colour of the living larva ranges from whitish over amber to bottle green; it is a a valuable identification character.

Van Nieukerken discusses the phylogeny of the Holarctic genera. Detailed descriptions of Nepticulidae mines are available in Emmet (1983a) and Johansson ao (1990a).

The prolegs (often a lot smaller than shown here) don’t bear crochets; perhaps that is the reason why in literature they generally are referrred to as calli (“knobs”). They eye patch have but one stemma. 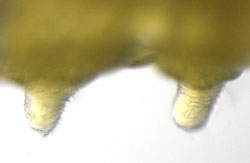 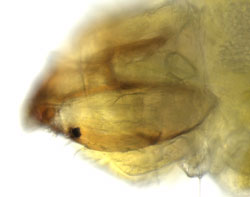 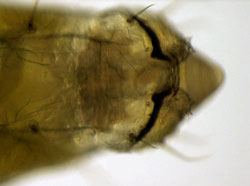 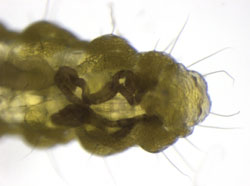 Stigmella‘s mine venter down, Ectoedemia‘s mine lying on their back. It sometimes is useful therefore to distinguish ventral and dorsal in the larva. The can easily be seen in the ventral neural chord, the central nervous system of all insects. In most nep larvae this can easily be seen as a grey or brown string, with a widening in each segment.

In a number of Ectoedemia species the larvae in their early stages bear ventrally on the meso- and metathorax and abdomen 1-8 (to 10) a large, often brown, plate. In the course of the final or penultimate instar these plates are shed, independent of the moult; only then the ventral neural chord becomes visible. In a few species also dorsal plates do occur (Gustafsson & van Nieukerken, 1990a).

Ectoedemia preisseckeri: larva, in the process of shedding its ventral plates; from Klimesch (1941b)