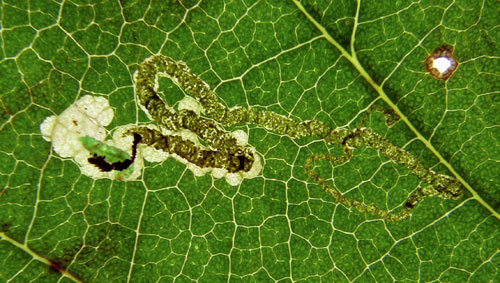 Egg at the underside of the leaf, usually against the midrib or a thick vein. Here starts a rather slender, not strongly contorted gallery, that runs independent of the leaf venation. Frass coiled, greenish when fresh, turning brown later. Frass fills the first section almost completely, further on it leaves a narrow clear zone at either side. Pupation external; to judge by the drawing in A & Z Laštuvka (1997a), te exit slit is in the upper epidermis.

Not known from the Benelux countries (Fauna Europaea, 2010).

From Germany to Italy, Croatia and Hungary (Fauna Europaea, 2010); also known from the Crimea (Navickaitė ao).