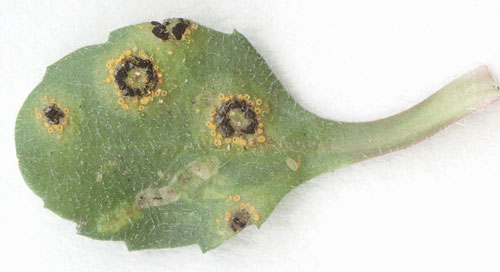 No host plant alternation; (in nature) no spermogonia; no uredinia.

The species is closely related with P. lagenophorae and P. obscura, but considered by most authors an autonomous species (Termorshuizen & Swertz, 2011a; Weber, Webster & Engel, 2003a); not, however, by Mułenko ao and Klenke & Scholler.

The species is known for over a century from Australia and New Zealand. It probably evolved there from another rust, perhaps P. obscura, by migrating to daisies that had been introduced from Europe. The rust appeared in Britain in 1996 and has dispersed since then all over Europe. Infected leaves are pale and stand more erect. The infection is distributed by the aeciospores; teliospores are formed but do not play a role.